The problem that each of us has is that life ends.  We are all facing eventual death.  We don’t know when it will happen.  For some it will come after many years of aging and a prolonged illness.  For others it may come instantly, at a young age, when least expected.  Life is short, too short it seems.

In the account of the crucifixion, we are shown two men facing death in just a few hours, who were crucified along with Jesus.  One did not find the answer, but the other man successfully found the solution to death.  He found the truth and dealt with the primary issue.  We know that he had the solution because Jesus said to him, “Truly, I say to you, today you will be with me in paradise.” Luke 22:43b ESV.

“One of the criminals who were hanged railed at him, saying, ‘Are you not the Christ? Save yourself and us!’”  Luke 23:39 ESV.  This man was focused on his own predicament.  He knew who Jesus was, but all he could do was rail on Him.  All he could do was find fault with the One who had the power to rescue him.  Why wasn’t Jesus doing anything?  The thief was demanding of the King, rather than being submissive to the King.  One cannot approach God with anger, scolding, and blame when seeking salvation.  This man did not deal truthfully with the primary issue.

So many religions today focus on minor, incorrect, or tangential issues when looking for the way to salvation.  The thief on the cross who found salvation did not deal with any of the following topics:  He did not seek to be baptized.  He did not ask to take communion.  He could not accomplish any good works while fastened to the cross.  He did not read the Roman’s Road.  He did not pray the sinner’s prayer.  He did not speak in tongues.  He did not have last rites administered to him.  He did not use rosary beads.  There was no money involved.  No clergy.  There was no church building.  He didn’t say anything about Mary.  He did not ask anything of anyone other than Jesus.  Also, notice that he did not go to purgatory since Jesus said that the thief would be in paradise with Him that same day.

The criminal who found the solution to death was laser-focused on what mattered.  He was focused on the primary issue.  He found the truth.  So what did the thief who was saved say after hearing the first thief?

But the other rebuked him, saying, “Do you not fear God, since you are under the same sentence of condemnation?  And we indeed justly, for we are receiving the due reward of our deeds; but this man has done nothing wrong.” And he said, “Jesus, remember me when you come into your kingdom.”  Luke 23:40-42 ESV

Have you dealt with the primary issue separating you from God?  Have you recognized that you are a sinner and guilty before God?  There is no one else to blame.  Don’t blame God.

We have no ability to accomplish anything to save ourselves.  In our own strength, we are as helpless and guilty and doomed as a thief on a cross.  Salvation is the great work of God alone.  Acknowledge the sin in your life and turn from it.  Humbly ask Jesus to remember you. 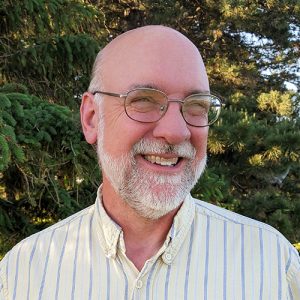 Mr. Brill has spent many years as a tool engineer for plastic injection molds working closely with craftsmen. This experience has given him unique insight into the character traits involved in craftsmanship. His engineering background has taught him to sort through things not readily apparent and get to the heart of the real issue. Mr. Brill has done a good deal of work on buildings, having remodeled an old house and having been on the board of trustees and then as a deacon at his church for many years. He has been a student and teacher of the Bible for many years as he serves in his local church.

Walking Uprightly in an Upside Down World

God is a Weight Lifter

September 16, 2022
PrevPreviousGod is a Weight Lifter
NextWalking Uprightly in an Upside Down WorldNext

CarpentersGallery.com is the online home of 'God's Building: A Gallery of the Beautiful Work of Jesus the Master Carpenter on Display in Solomon's Temple' by Edward D. Brill.